On Saturday Morning March 3rd, First Sergeant Marshall marched the Color Guard and Drill team to Indianapolis for the annual Indianapolis Drill State Championship. Commander Tiffany Sachs of the drill team took home 2nd place in state Regulation Squad Drill category! The color guard was commanded by Victoria Wehmeyer. Team A earned second place and the color guard B team earned a State Championship in the color guard drill category! There was also three cadets that scored above top ten out of three hundred competitors in the individual drill, which were Senior Jacob Powers who came in 8th place, Freshman Paige Bordowitz came in 4th place, and sophomore Abbey Clemmons who came in 2nd Place!

I interviewed First Sergeant Marshall and asked him what does the drill team and color guard do at state, and he replied with “there were twenty-four other color guard teams down at state. They have to do it precisely and call the commands precisely.” He also said, “The drill team does a set of movements also but it’s bigger over the entire gym floor. There are fifty-seven commands that Tiffany Sachs had to do flawlessly. She came in second place, I personally thought she should have been first and she did an amazing job.” The color guard and drill team do a nonstop practice for four months straight. They were able to get use the fieldhouse, gym floor, and the upper gym to practice twice a week for this amazing event. First Sergeant Marshall repeatedly said that they did an amazing job at state. Congratulations on your success to Commander Tiffany Sachs of the drill team, Commander Victoria Wehmeyer of the Color guard, and the three cadets which were Jacob Powers, Paige Bordowitz, and Abbey Clemmons!

Here are some pictures from the Championship! 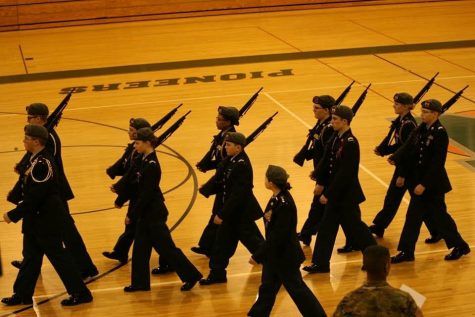 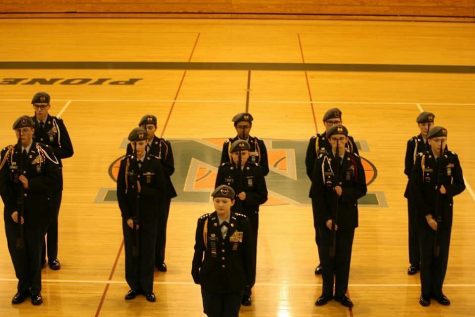 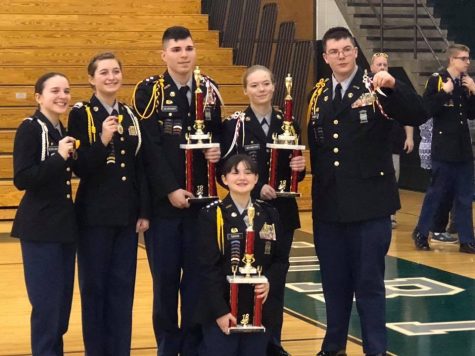