It was an all-out slugfest as described in the words of head coach Bob Glover. On Monday, the first place Andrean 59er’s traveled to Hobart for an NCC showdown. After coming off a fantastic start to the season, 11-5 to be exact, the Bricks were hopeful. Though Andrean was 16-1, no one in the region gave Hobart a chance except for the players in the locker room. When asked to the starting pitcher and leadoff batter Matthew Benton, he had this to say about the big game. “We have had this game circled on the calendar for months now. Knowing that they haven’t lost to a team in Indiana all year, it gave not only me but the team extra motivation to get the job done.” 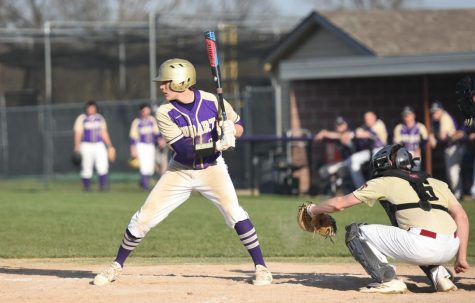 Well, the Bricks did just that. After being down 4-0 in the first inning, the Bricks came firing back with some power of their own. Junior Sam Valdez cranked a solo shot to the parking lot to start the 5 run inning for the bricks. “My team needed me to come up big and start something, so I saw a good pitch and drove it,” Sam Valdez. Later in the inning, Senior Michael Hunter hit a 3 run “inside the parker”, on a bizarre play where the Andrean centerfielder got his pant leg stuck in the fence. That would result in the Bricks to a 6-4 lead going into the third. “My opportunities to contribute on the field are winding down due to me being a senior. So I took advantage on a good pitch,” said Michael Hunter. 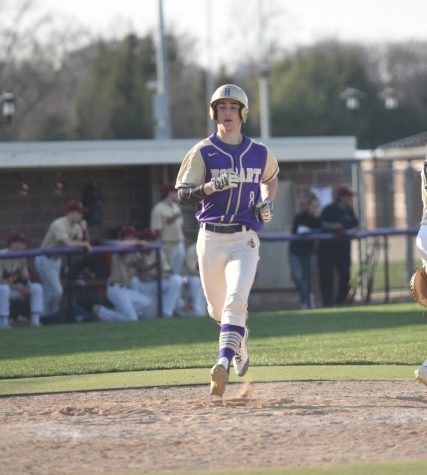 Though the Bricks got the 6-4 lead, that would soon diminish when Andrean scored 3 quick runs to get ahead 7-6. Later in the contest, the lead would go back and forth with the Bricks having grit. In the 6th inning, the Brickies took advantage of plate discipline and scored 6 runs to go ahead 15-11. “We’ve practiced discipline at the plate all winter”, said starting second baseman, Brock Cooper. “As Coach Curatolo always says, We love free bases!” 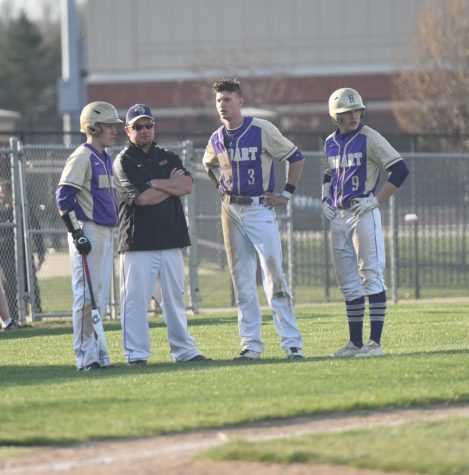 Teammates Brock Cooper, Sam Hicks, and Matthew Benton talk it over with Head Coach Glover during the NCC showdown

Hobart baseball travels to Hanover Saturday. Come out for a good day at the ballpark and support the Bricks.