As the season is not over for the Hobart Brickie wrestlers, they’ve already had many great things happen this season. Jason Cook, the head coach had nothing but positive things to say about this year’s team. This is Coach Cook’s first year coaching for Hobart and from talking with him, he explains to me how amazing it is. In the interview he states “I’ve coached at other schools for 10 years and I’ve received just as much support coaching for Hobart for 6 weeks now, that I have in the 10 previous years”, this shows how much Hobart supports everyone. Coming into a new school isn’t always the easiest, especially in sports. They don’t necessarily know how the team or other coaches are going to be. The wrestlers were skeptical with someone new coming in to take over. Some of the wrestlers explain to me how they feel about the change. Sophomore Tyler Turley states, “ Not knowing who was coming in and how things were going to run. But things are definitely headed in the right different and we’re working a lot harder.” Sometimes change is good for a team, new ways to get better and ways to work.

Coach Cook believes there are so many people on the team that fall into the leadership category. In the interview, I had asked him who his captains for this years team were and he had a few captains in general. He states “The easiest team captain pick would be Tyler Turley, he’s the most vocal of our leaders”, Tyler Turley is someone who comes into the wrestling room to work and get prepared for his competition. He also states “Jacob Vode, by working by example and just knowing what to do” Jacob Vode is the only senior on the team this year. Therefore he is expected to be one of the top leaders. Coach expresses that “ I’m hoping we have a situation where we have so many leaders that it doesn’t matter who the team captains are”, in the wrestling room everyone is expected to be a leader.

The goal for a team is always to make it the farthest you can. Wrestling is more of an individual sport, when it comes down to the end it’s up to individuals to make it to the top. As I was talking to Coach Cook he had told me “I think we’ve got several guys that I’m hoping have very high goals for themselves”, many of the wrestlers could have a very good season if they just stay in the right mindset all season. In the interview, Sophomore Cristian Padilla states, “My goal this season is to make it to state”,  but of course staying undefeated throughout the season can help get you there.

The 2018 season isn’t over until February but the Brickies have done an excellent job so far.  They had an outstanding win at a dual meet against Lowell. Lowell was ranked higher than them according to the newspapers so the team came in ready to compete. Coach Cook states “I think if we wrestled them again we could beat them by more”, the team can look back on their previous matches from that night and fix it for the next time. Many of the wrestlers are starting the beginning of the season undefeated and they plan to stay that way throughout the whole season. Freshman Ruben Padilla, Sophomore Tyler Turley, and Sophomore Bobby Babcock all have a Harvest Classic Title so far this season. There are also some guys semi-state as well as state-ranked this season. Semi-state ranked includes: 106- Ruben Padilla #5, 152- Tyler Turley #2, 160- Jacob Simpson #5, 170- Jacob Vode #7, 195- Bobby Babcock #5, and 220- Mark Mummey #8. State Ranked includes 152- Tyler Turley #11. The season is off to a great start for the Brickies. 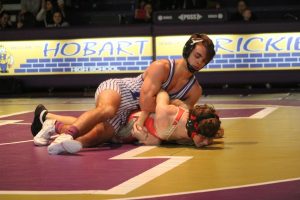