The Dinosaur & King of the English department

The personalities of the English department. 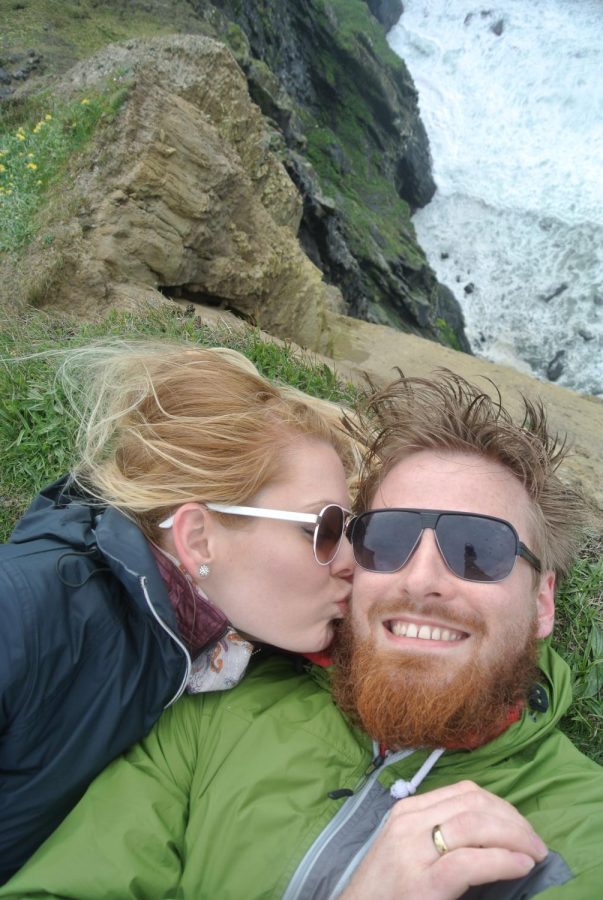 A LOVELY VIEW. This picture was taken by Mr. Horjus during his and his wife trip to Ireland in 2014. They are at the Cliffs of Moher with there hair that is wet because the water reached them at the top. "When you lean your head over the edge your heart is pounding. Then when your heart slow down it feels exhilarating."

Ms. Bartsch is an English teacher at Hobart High School and involved with the slam poetry club. Most people only know that side of Ms. Bartsch, but there is more to this English teacher that the students of Hobart should know. Madeline Bartsch also used to compete in dance competitions. She and her dance partner Louie met in college when she joined the dance competition team. Ms. Bartsch joined the team in order to take a leap out of her own shell and to reclaim her life after a toxic relationship with her ex.

She and Louie, her dance partner, competed in multiple competitions throughout her college career and even some after when she had just begun to teach. They would meet up on the weekend and practice their choreography for a day and then the next day compete and did fairly well making it to the podium multiple times. Another fact that many students may not know about Ms. Bartsch is that she also didn’t always want to be a teacher.

When she was younger she wanted to pursue music and played in her school band. She also had another bad boyfriend in those years but a story you can ask her yourself. Her parents, Mr. and Mrs. Bartsch, were both in the theater and Mrs. Bartsch was even a rocket dancer. So her environment was always filled with music, plays, and encouragement. Ms. Bartsch gives her students a chance to learn more about her every Friday. Though many kids use bland questions she is able to give an awesome response to it. For instance whenever anyone asks about her age she just adds another year to it. That is where she came up with the concept of her being a dinosaur. She would answer the question by saying, “I am twelve million years old.”.

Ms. Bartsch and Mr. Horjus teamed up to teach dual credit and Honors English. They did this because they both had different experiences with the courses, and believed that together they could teach the concept more effectively. This also would help the students not place blame on one of them by saying something like one of them extended the deadline for there class.

Mr. Horjus had taught the course in a university setting but technically wasn’t a professor. While Ms. Bartsch had taught it throughout high school. The mesh  personalities of these two while interviewing were amazing. Ms. Bartsch is a more organized person with a binder calendar with sticky notes on each day. The sticky notes are even color coded for certain events or assignments. Mr. Horjus on the other hand is more open to change and going with the flow. He makes a vague plan and then can adapt to any new circumstance that comes up. They would bounce off each other and I barely needed to speak. The whole time I could see them feeding off each other, and I could see how they were able to work together so well.

Mr. Horjus, King Horjus the Seventh, has traveled all over the world either by himself or with his wife. They visited other countries and world wonders. Mr. Horjus visited Ireland and it holds a special place in his heart. It is one of his favorite trips he took because everything you think is good about Ireland is better. The food, culture, and people are twenty times better than your expectations. Mr. Horjus also grew up with a huge variety of pets. Some of these pets would include dogs, cats, lizards, snakes, chicken, duck, parrots, and a gang of rats.

While King Horjus the Seventh is known for his bubbly and likable personality; he has been through his own battles and wars. Those aspect in his life shaped out his independence, and keen will to learn anything on his own. He learned how to play the guitar by himself; he can’t read a line of music, but can still create his own mystical music by ear. Mr. Horjus is always willing to help any students or to be a role model for them. King Horjus the seventh is a king because of his determination and will.